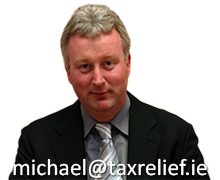 In early 2013 TaxRelief.ie merged with Michael Murphy & Co. to offer clients a wider range of services, better access and a greater  level of expertise. Michael a Fellow of the Association of Chartered Certified Accountants and qualified Auditor has over 20 years experience in private practice, 12 of which have been the operation of his own successful practice in the South East. Offering a professional and market leading service, Michael is well regarded for both his professionalism and the personal touch he takes when dealing with clients.

TaxRelief.ie was originally founded in 2011 by Darragh Beagan, a qualified ACCA accountant with a Masters in Management and over 10 years experience in private practice. Having become frustrated with the increasing administrative burden on taxpayers and the constant introduction and raising of new taxes and levies, Darragh sought to simplify the process and maximise the tax relief's available to individuals and self employed, therein launching TaxRelief.ie. Although TaxRelief.ie now operates under Michael Murphy & Co., Darragh is still heavily involved in the new organisation and is Head of New Business at the firm.